The Principals of Transducing Energy Devices, LLC began the investigation into a fuel-less electricity generating device. The decision was taken to focus on the use of a defined free-energy source.

In 2014, a device was designed based upon using the freely-available energy from permanent magnets and was named the “Permanent Magnet Induction Generator” (PMIG).

In 2018, the investigation into the design of a second and smaller device was initiated. It is the PMO (Permanent Magnet Oscillator) and is the basis for a compact magnetic battery. A magnetic battery based on the PMO would power cell phones, personal computers, etc., and eliminate the need for external charging. This effort has produced two designs that oscillate spontaneously.

The company started with $1.1M in angel seed money and now needs to raise substantial funding.

The PMIG is a standalone device less than a cubic foot in volume with an estimated weight of 75 lbs (34 Kg). It is self-exciting, nonpolluting, and usable in both moving and stationary applications. Permanent magnets supply the input magnetic flux (energy) for free. Simulations indicate that the PMIG generates electrical power without the input of other external energy such as fuel, sunlight, heat, wind, and chemicals and does so in sufficient quantities to be useable in most energy applications, e.g., automobiles, houses, boats. The below is the design of the virtual prototype with animation:

The below is a photograph of the physical prototype under construction:

A computer simulation that assumed hypothetical Reluctance Switches with preferred magnetic characteristics produced an average gross output power over 100,000 Watts at 1 kHz before losses from: the soft magnetic material comprising the conductive parts of the magnetic path, the waveform conditioning, and the feedback power siphoned off to operate the Reluctance Switches. The output power waveforms, which of necessity are “spikes,” are shown below

The PMO is a small stand alone device, (5x2x2cm). It is a permanent magnet oscillator comprised of “hard” and “soft” magnetic materials. With the addition of electrical rectification, it becomes a permanent magnetic battery. The PMO virtual prototypes oscillate spontaneously. A configuation will be published after it is patented.

Frequency is determined by the turns on the pickup coils. 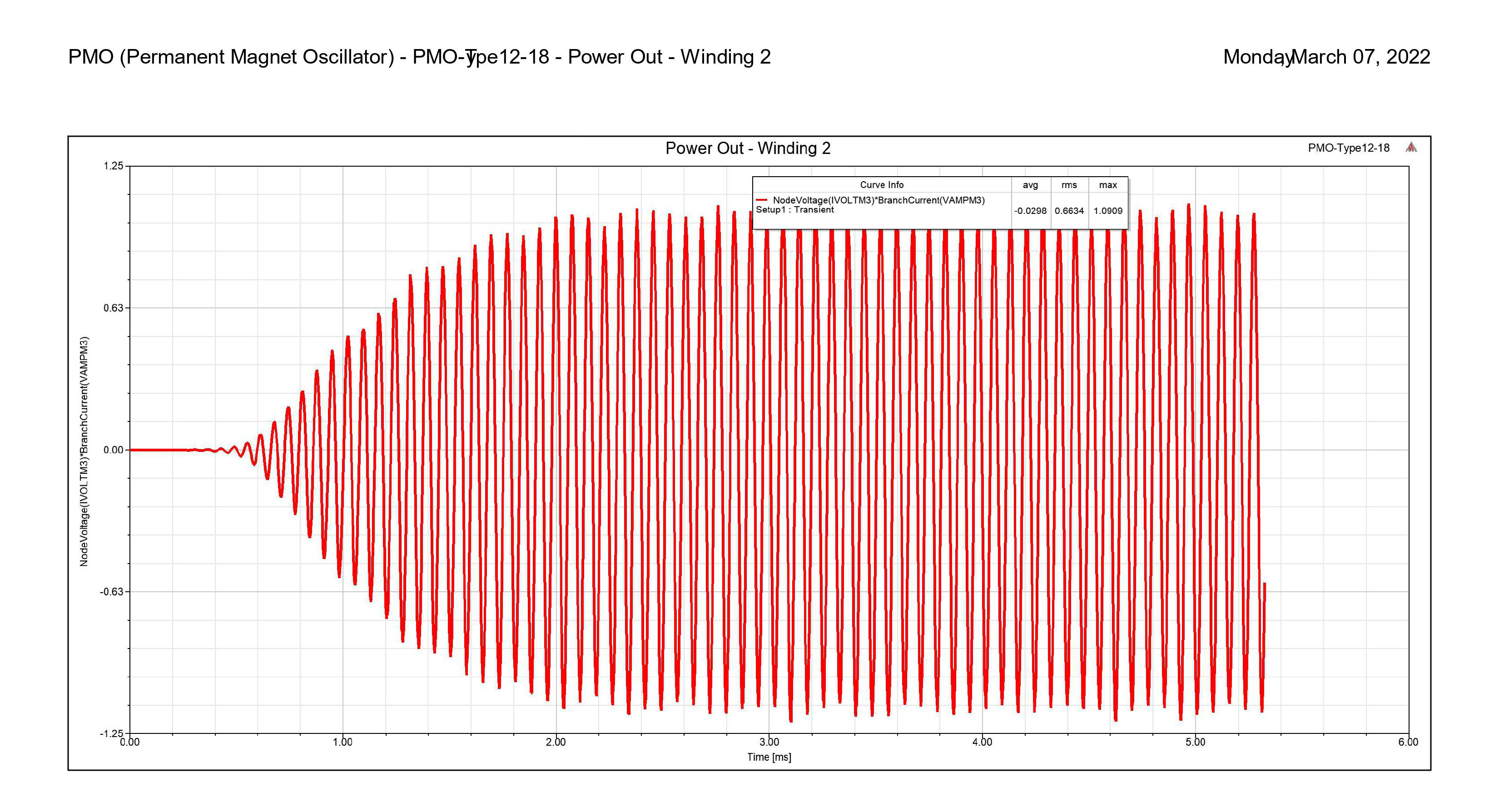 A successful PMIG could decentralize the production of electricity. R&D to date indicates sufficient power to be useable in most energy applications (e.g., automobiles, houses, boats).

The financial opportunity is so immense that it is best gauged as some percent of a country’s GDP that is currently spent on conventional energy. The opportunity to improve the environment worldwide is also immense because of the reduction in global pollution that would result from the switch away from combustion of carbon-based fuels.

The company needs to raise funding. There are opportunities to invest. A private placement offering memorandum (PPOM) is available; send a written request on your company's stationary to:

The Company is a Michigan LLC that was formed in 2005 for the specific purpose of performing R&D for the creation of a fuel-less electrical energy device.